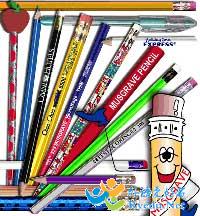 N. J. Conte, in 1795, successfully produced pencils, after the later famed Faber family of Nuremberg, Germany, failed to do so, by using apulverizedgraphite base to create a substandard, crude prototype of a pencil. Conte's method, the basic recipe used by all pencil manufacturers today, differed from the failed Faber fiasco, as he groundgraphite, mixed it with certain types of clay, pressed the "dough" into sticks, and finished them in akiln. The Faber family followed suit, and achieved the fame and fortune that previously eluded it.

The recipe used by modern pencil manufacturers, calls for dried, ground graphite, a form of carbon, mixed with clay and water in varying proportions. Pencils made with more clay produce a harder pencil, and, conversely, pencils made with more graphite produce a softer pencil. In either case, the ingredients are mixed until they reach adoughyconsistency, and then pass through a forming press, which presses the dough into a pencil thin, smooth, glossy rope. After workers straighten the rope they cut it into the desired lengths, and bake them in industrial ovens.

While the mixture is prepared and baked, workers prepare the casing that will house the lead. They shape the wooden casings, made from either red cedar or pine, into halves, and carve grooves in them to encase the graphite-based leads. The workers then carefully insert the finished leads into the grooves, glue the two wooden halves together, run the resulting slats through a saw that cuts them into single pencils, and finish them with a shaping machine that smoothes the pencils' surfaces.

Modern pencils come in over 350 varieties; each designed for a specific use, and may be purchased in over 72 colors. Black pencils, or graphite-based pencils, come in 19 degrees of hardness and of intensity. Specialty pencil leads are crafted to write on surfaces such as cloth, cellophane, plastics, and movie film. Architects, engineers, and those doing outdoor construction work primarily purchase these specialty leads, as they possess non-fade, weatherproof qualities. The versatility of Conte's brainchild, the pencil, makes it the essential, indispensable tool of these trades.